Paloma Faith review by Becky at 'The Wonders of Wardrobes' 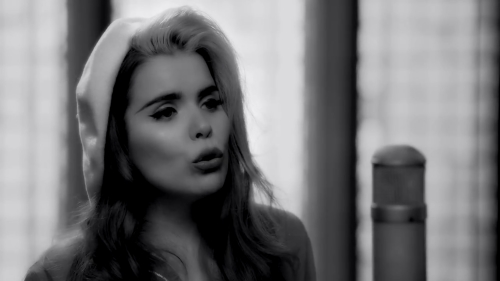 If you have not heard of Paloma Faith before, pull yourself out of that rock you’ve been living under and give her a listen. Her recent single release ‘Black & Blue’ taken from Paloma’s second album is a moving, truthful and soulful number. In the video, Paloma portrays the images of those in desperate times and reminds her audience not to put themselves above these people as we ourselves have been in their place or know someone who has.

‘We’re just the same. We all get desperate sometimes.’

Paloma Faith was nominated for two BRIT Awards this year (although she didn't win any of them, but we’ll forget about that, eh?) and although I would have loved to her to win ‘Best Female Solo Artist’, she lost out to Emeli Sandé. That may be because every time there was a chance to perform at The Olympics, the only person they seemed to ask was Miss Sandé herself. (I promise there is no bitterness here.) Just to be nominated though out of so many incredible female artists is still an achievement and I hope next year she will be in with a chance of winning it.

‘Wipe it off your sleeve, your superiority.’

Paloma Faith’s album has an incredible jazz and soul feel to it that makes it the perfect album if you want a bit of relaxing, easy listening. Her voice is unique, powerful and incredible which makes each of her songs come to life with raw emotion. If you don’t even get a little tinge of sadness from the likes of ‘Just Be’ and ‘Streets of Glory’ then I would get your heart checked out to make sure it’s not made of stone. Paloma has said that this album is based on her ‘last few years’ and it contains more ‘agony and suffering’ than her first album. She took inspiration from ‘Relationships with friends and family. Romances’ and you can truly feel her love and pain in every single word she sings.
Paloma Faith is not only an outstanding recording artist – she is an empowered woman. Her strong willed attitude is something to be desired and achieved. If her music isn't your sort of thing, that’s alright, but you have to admire her incredible ways of knocking the criticism aside and carrying on doing what she loves.  I know if I were to put in the ‘Worst Dressed’ section of a magazine time after time, it’d make me question what I was doing. But not Paloma Faith. She carried on doing what the bloody hell she wanted and for that I have to say, I’m glad she did.

‘Don’t roll your eyes, my sweet.’
- by Becky at www.thewondersofwardrobes.blogspot.co.uk
Posted by Unknown at 11:00
Labels: Guest blogger, Music