Just because we are the most successful mammal on our planet, why does that give us the right to torture and kill other animals for our gain or pleasure.
I recently watched a video from PETA on the increased activity in real fur procurement for the fashion industry and it really made me think; what was I putting animals through for what I put on my face everyday. I had a look at Peta online and was amazed to find that of all the brands or makeup and skincare I use (which is about 30) only a handful categorically did not test on animals. These were Dermalogica, E.L.F, Burt’s Bees, Hourglass, LUSH, Neals Yard Remedies, Stila, Tarte, The Body Shop, Urban Decay.
Notice the shocking lack of the big names.

Animals are not lab toys, they’re intelligent creatures that experience pain, fear, loneliness, frustration and sadness. What is worse is that the results of these tests are often inaccurate, further more these tests are not even required by law. Even if a product has blinded a bunny, it can still be sold for you to use.
I’ve discovered from Peta that scientists have actually developed tests that can be carried out in vitro using artificial human tissues such as skin and eyes that react exactly the same as a living human would. What’s more is that these tests not only end unimaginable suffering but they save the companies money as these new tests are faster and cheaper.

Animals being used for tests are not the only ones suffering at the hands of humans.  Last year 143 racehorse deaths were recorded following races. However, the true figure is likely to be about 30 per cent higher. Of the 143 horses most of the deaths resulted from broken limbs, backs and shoulders, as well as cardiovascular failure. Many of these injuries are caused because the fences they are forced to jump are too difficult for them or something so simple as the ground being too hard. The British Horse racing Authority (BHA) simply never publish clear or complete data on the horses killed. 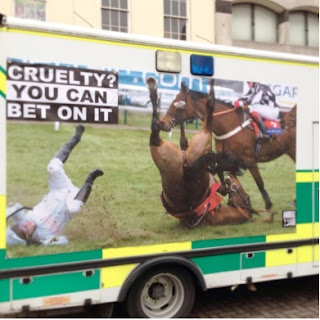 Animal Aid is the UK's largest animal rights group and one of the longest established in the world. They organise peaceful campaigns against all forms of animal cruelty. They investigate and expose animal cruelty, and their undercover investigations are often used by the media, bringing these issues to public attention. Animal Aids ‘RaceHorse DeathWatch’ was launched during the 2007 Cheltenham Festival. It aims to expose and record every on-course thoroughbred fatality in Britain. Last year while the Aintree’s April 2012 meeting killed three horses, five died at the Cheltenham Festival just a month earlier.
This years Animal Aid are once again campaigning at the festival and ethical cosmetics retailer Lush are doing even more than just not testing there products on animals, they are actively campaigning alongside Animal Aid. As of 7th March a converted ambulance emblazoned with stark protest imagery and a powerful short film on the side of the vehicle was screened continuously, leafleting took place outside every major bookmaker in Cheltenham and Lush are featuring a striking window display to draw attention to the horses who have died at recent festivals.

Also there will be a protest on the first day of the Cheltenham Festival itself (today) at which ‘tombstones’ bearing the names of the dead thoroughbreds will be displayed, while a mourner reads out a short eulogy for each horse. A series of equally forceful initiatives relating to Aintree will be announced shortly which I hope Lush will be Equally involved in.
Lornalouise Wotherspoon
www.beautyandkittens.blogspot.com

This is a guest post for the e-tailPR blog, all views and opinions are the writer’s own and do not represent those of e-tailwebstores.
Posted by Unknown at 10:00
Labels: Guest blogger